The Passion for Pens IS our Business

Anderson Pens is the joint effort of Brian and Lisa Anderson, two long time pen collectors who actually met through the collecting hobby, fell in love, got married, and founded the company in 2010.

We used to bid against each other on Ebay for vintage Esterbrook pens, back when the bidder names were still visible, and we cost each other a great deal of money in the beginning, until we called a truce after about 2 years. We met in person in 2003 at the Chicago Pen Show, and we were instant friends - two collectors who shared the same passion for the Esterbrook brand. We even had some of our pens photographed together for a fountain pen book.

Lisa wrote an article for the now-defunct magazine Stylophiles, and had several of her pens professionally photographed. She sent the pictures to Brian, and they included a very rare doctor’s pen with an unusual name engraved on it. Brian emailed back and sent a picture of a pencil he owned – the same very rare model, complete with the same unusual name. What are the odds of that? We each owned two halves of the same set!

We lost touch for a few years, and then found each other on Facebook of all places. We discovered that we had a great deal in common besides pens, and in December 2008, Brian flew to Tampa to visit Lisa. Six months later, Lisa and her kids moved to Brian’s home in Appleton, Wisconsin.

2010 was a busy year for us – we got married AND founded Anderson Pens – life has never been better! or busier! We started our online store, and attended pen shows all over the country, generally 12-15 shows a year. In November 2013, we opened a retail brick & mortar pen store in downtown Appleton, and we would love to meet you if you are in the area - please stop in!

We have over 50 years of combined experience buying, selling, collecting and using vintage and modern fountain pens, inks, and fine papers. We are both members of the Pen Collectors of America. We encourage you to check out their site and become a member! Lisa is a past President of the PCA. 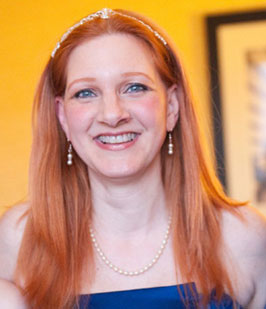 Brian’s collecting focus includes Esterbrooks, hard rubber pens from the 1920's, and vintage Japanese pens. Aikin Lambert, Paul Wirt, John Holland and Sailor are finding their way into the pen chest more often than not these days. Brian has studied pen repair with Joel Hamilton and Sherrell Tyree as well as completing Richard Binder's intensive three day nib workers' course (twice). Brian takes care of all the pen repair and answering all those minutiae on Esterbrook you can think of.

Lisa’s collecting focus also began with Esterbrook, but she has expanded into the old style faceted Pilot Vanishing Point pens. Other favorites include Italian and Japanese pens, such as Aurora, Pilot, and Sailor. Lisa is your Ink and Paper Expert, and she manages the day to day activities at our satellite store in Chicago, which reopened in October 2021, after the pandemic closed the store for 18 months. Please stop in to the Chicago storew, on the ground floor of the Palmer House Hilton Hotel and say hi!

We could not do what we do without the help and support of our Amazing Anderson Pens Team!! And we do mean that sincerely. Our staff is the best!

As Store Manager, primary customer service contact person, and family friend for over 25 years, Dave juggles many hats at work. He is also a very devoted husband and father, accomplished chef and keen baseball fan. Dave loves enjoying the outdoors. This includes gardening, exploring Wisconsin's parks, and his annual camping trip with his daughter at the end of each school year. A music major in college, he still performs and is the treasurer for a local community band in the area. Dave has a very calm demeanor, and is very intentional, so when he cracks a joke or zinger one-liner, it hits you twice as hard!

We met Steph in 2013 and she is the happiest, most optimistic person we know. When she joined Anderson Pens, we had no idea how integral she would become. Steph has worked almost every job in our company, from shipping to sales to photography, and currently amazes us daily as our Senior Image Editor. A graduate of Appleton's own Lawrence University, Steph is a master of puns and an avid player of Dungeons and Dragons - she is also afraid of butterflies. Steph feels stress when looking at red inks and dislikes touching bricks because "they feel icky." She speaks English and French and can decode Latin. Steph can be seen on the AP YouTube Channel presenting her Top 5 Inks and occasionally guest hosting the Anderson Pens Podcast.

Award-winning filmmaker Justin came to us from a job in television that required him to be at work every day by 3am. Besides gaining several hours of sleep each day since joining us, Justin has become a vital part of our Creative Team. Justin is credited (or blamed) for all AP videos and is the creator, animator, and voice of Lisa's favorite AP video character, Ink Bottle Dude. Justin is left handed but tilts his head to the right when thinking hard. He likes hamburgers, cameras, and once single-handedly ended a high-speed car chase. It is a favorite challenge for Brian and Lisa to make Justin laugh during podcast filming. So far, Justin is winning this battle. Justin insists that he does not collect Parker Jotters or funky-patterned socks - but no one believes him.

The leader of the Anderson Pens Creative Team, (aka The Funny Farm), Eric comes to us with decades of experience and creative energy. Known for establishing InCoWriMo, founding FP Geeks, and organizing the Philadelphia Pen Show, Eric never fails to inspire, motivate or coerce the rest of the company into all sorts of mischief. Eric enjoys jumping on random city buses just to "see where they go." He tries (but fails) to keep his pen collection to a maximum of twelve. Eric doesn't like pink but claims that pink likes him. In his spare time, he takes his skateboard to the skatepark and pretends he's back in California. Eric speaks English, Spanish, recently took French lessons, and was named Time magazine's Person of the Year in 2006.

Amanda, Dave and Brian have been friends for many years, as co-workers at a previous company, and it was our pleasure to be able to hire her when the former company downsized her. Amanda had decades of inventory experience, is amazing with customers in the store, and has terrific outside-the-box thinking that has been extremely beneficial. Amanda had never really used a fountain pen before joining us, but has certainly jumped in with both feet. Amanda is married and has a daughter and 3 cats. She enjoys thrift shopping, reading, and watching trashy reality tv. Amanda is also a dedicated Plant Mom, and loves to spend time tending her plants.

A Cornucopia of Coolness! An Avalanche of Awesome! The Anderson Pens mailer delivers Mouth-Watering Photos of our Newest Products, Hottest Items, and Trending Gear directly to your inbox each and every Tuesday. Don't miss out! Join the list today!
Account Shopping bag

Create an account with us and you'll be able to:

Fill in your email below to request a new password. An email will be sent to the address below containing a link to verify your email address.